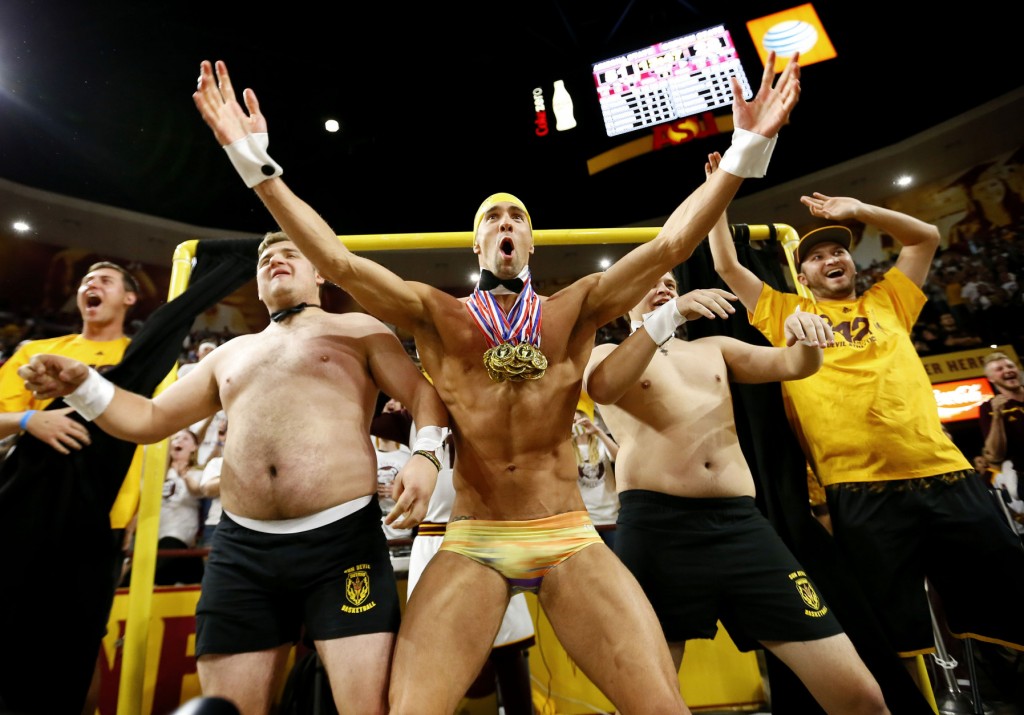 Phelps, America’s most bemedalled swimmer, in fact still the most decorated Olympian of all time, starred in the latest of ASU’s infamous “Curtain of Distraction,” a traditional skit carried out by those at the university’s student section to distract opposing players during certain critical moments of play. With 13:47 remaining in the the second half of Thursday’s game and with Oregon State’s Stephen Thompson Jr at the charity line, Phelps made the rookie guard to flub both of his free throws.

As Thompson was preparing to take his first shot, ASU students pulled the black curtains open, revealing Phelps with two other students –  Trevor Zero, a business communication senior, and Patrick Carlson, a political science junior, ripping off their shirts and jumping up and down. Phelps has a yellow swimming cap on his head and about a dozen or so gold medals dangling around his neck. Distracted, Thompson missed his first try. As he was aiming for his second free throw, Phelps reappeared from behind the curtains, this time, just wearing his swimming cap, his medals, a Chippendale’s bow tie, tuxedo cuffs, a tiny Speedo, and nothing else. The audience roared and went wild. Again, the poor Thompson missed the hoop.

The “Curtain of Distraction,” a tradition started by an ASU student group known only as the “942 Crew,”involves setting up a pair of black curtains directly behind the basket during critical free throw situations. Parting the curtains typically reveals some strange characters doing all sorts of distracting stuff. In the past, the audiences were treated to skits featuring a twerking bearded ‘Miley Cyrus’ twirling a wrecking ball, a prancing diapered cupid, and a gyrating ‘Elvis Pressley.’ Phelps’ take as himself however seems to have made the most impact so far. The video of his skit at Thursday’s game is now still making the rounds at the social media pages.

The 30-year-old Phelps, who lives in suburban Phoenix, is training for the 2016 Summer Olympics in Rio de Janeiro, Brazil, under the tutelage of Bob Bowman, his longtime swimming coach, who is also currently the head coach of the Arizona State Sun Devils’ swimming and diving teams. Bowman was recently appointed as the head coach of the men’s U.S. 2016 Olympic Team.