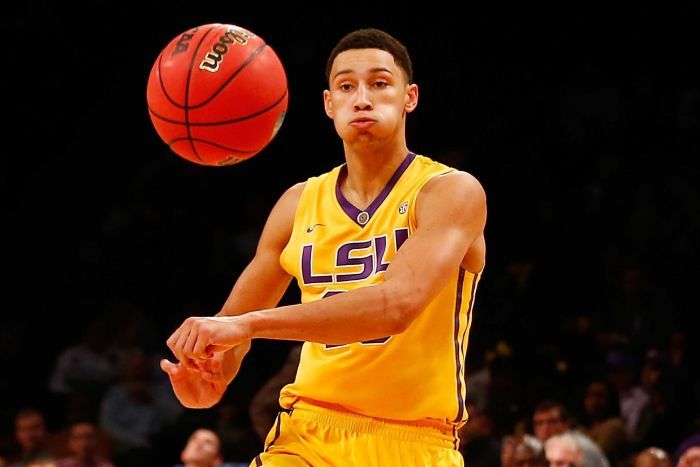 “LSU’s Ben Simmons is the best all around player I’ve seen since LeBron James came out of high school straight to the NBA,” basketball great Magic Johnson said in a Twitter post. “Whatever team selects Ben Simmons, will be getting a player that will have an immediate impact on their squad!”

The 19-year-old Simmons from Melbourne, Australia, is a freshman at LSU majoring in Sports Administration. Playing for the LSU Tigers, others have also compared the 6-foot-10 guard/forward to the legendary Johnson himself because of his exceptional passing and ball handling skills and his scoring and rebounding abilities. When the Tigers won 119-108 against North Florida on December 2, Simmons contributed  43 points, 14 rebounds, 7 assists, 5 steals and 3 blocks to the team effort. Currently, ESPN’s projected 2016 NBA Draft places him at the No.1 spot.

Being No. 1 in the NBA Draft means Simmons’ days as an LSU Tiger are likely also already numbered. But for now though, he said he would prefer to just focus on the college experience as a normal student-athlete and enjoy the moment as much as he can. “I just focus on what I can control, and just play as hard as I can,” he said in an interview with Fox Sports-Australia. “We can definitely still make [the NCAA tournament]. If we win the SEC [Southeastern Conference], that’s going to be huge. It’s just about enjoying it all, though.”

At last Sunday’s game, the LSU Tigers losed 77-75 to Oklahoma, the first placer in the Big 12 standings. With 15:31 left to play , Simmons was able to take just two more shots and was forced to commit three turnovers down the stretch by the tough Sooners defenders. In contrast, Buddy Hied, Simmons’ closest contender for the No.1 spot at the 2016 NBA draft, scored 21 of his game-high 32 points during the second half.

On Tuesday, Feb. 2, the LSU Tigers will next be playing against the Auburn Tigers (9-11 overall, 3-5 conf) at the Auburn Arena in Alabama. It will be an interesting mascot match-up between LSU’s Mike the Tiger and AU’s Aubie the Tiger.