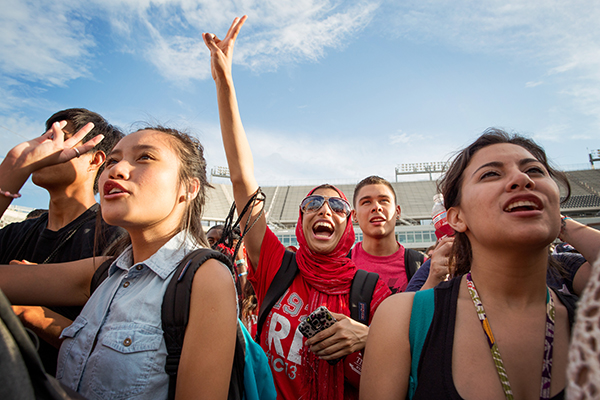 Everything You Need to Know About the University of Houston

Here are some things that you will find interesting about the team:

Students, faculty members, alumni and fans make use of the popular hand sign called the Cougar Paw. The cougar paw has the ring finger bent, and touched by the thumb. This hand sign represents camaraderie and support among Cougar fans, and originated during a football game between the University of Houston and the University of Texas in the 50s.

During the game, members of the Alpha Phi Omega brought the University of Houston’s mascot Shasta 1. The front paw of the cougar was cut off after being caught in the cage door, and Longhorn players started to taunt their opponents by holding up their hands with the ring finger bent. Texas would go on to win the game.

Fifteen years later both teams met again but this time the UH fans held up the hand sign as support to their squad. Eight years later, UH routed UT with the former’s fans celebrating by holding up the said hand signal.

The University of Houston’s men’s basketball team from 1982 to 1984 was cleverly nicknamed “Phi Slama Jama” for their slam dunking and exciting, fast-breaking style of play. The team was no slouch as well as they were bannered by two future basketball Hall of Famers in Hakeem Olajuwon and Clyde Drexler.

The nickname was coined by a sportswriter named Thomas Bon in a Houston Post article. It was so catchy that the players and team officials adopted it right away even appearing on the warmup suits during the 1

The team was no pushover either on the court, as they advanced to the Final Four each year from 1982 to 1984. Despite not winning the NCAA championship, the team is credited for

Shasta is the official name of the university’s mascot. The cougar’s name was coined by a student named Joe Randol, who won a contest sponsored by the Alpha Phi Omega fraternity in 1947. Shasta is a play on the phrase ‘she has to.’

From 1947 to 1989, the University of Houston kept a live cougar. But it stopped taking care of a live animal from 1990 to 2012, with Shasta appearing only as a customed mascot.

The latest Shasta, Shasta VI, arrived in Houston in 2012 through a partnership with the Houston Zoo. It came to Bayou City from Washington State, and was rescued along with his two brothers after a hunter killed their mother.

In 2012, the costumed Shasta got involved in nasty fight with Oregon’s Donald Duck mascot. The latter attacked the costumed cougar while it was doing push-ups for total points scored by UH after a touchdown. The fight was caught on cameras, posted on YouTube and reported by major media organizations like ESPN.