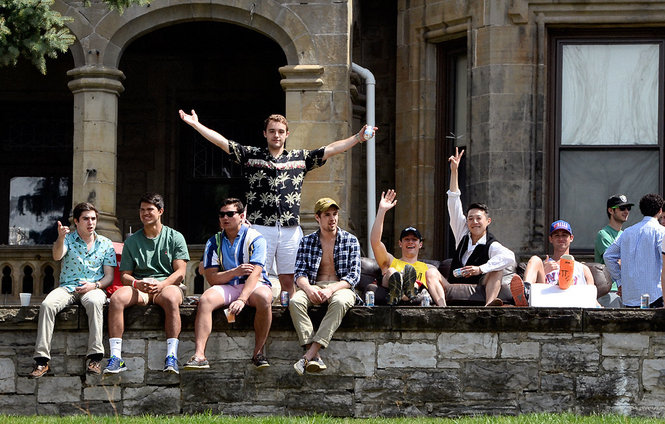 College is fun and considered as the most carefree stage of every student’s life. Hence, you need to grab every opportunity that is being offered at the Syracuse University. The home of the Orange, Syracuse, is considered as a traditional college town.

Students from all society levels choose to attend this school and spend four years of their life inside the campus. Every institution of higher learning has its unique traditions and landmarks. So, before graduating from this school, enjoy the following:

Nobody wants to get in trouble voluntarily. However, if you have the chance to throw a dope game just to make a lot of people happy, it might be worth a try. In the first place, rules were made to be broken and it’s not too bad to live a little.

This does not mean that you have to do the same thing over and over. For those who haven’t been written up, even once, while staying at the Syracuse dorms, you might want to re-assess your definition of fun.

You might have seen how the doors to these parties look like. The doors are well-guarded and a freshman might think that these parties are exclusive and akin to the most popular clubs in the world. If you’re not a girl, don’t bother joining the party.

But for those, who are fortunate enough to get accepted in this group, you’ll surely enjoy staying on the other side. Of course, some gate-crashers attempt to join the fun, but if they don’t have a backup, they’ll only be beaten up.

It’s not that easy to get alcohol from the liquor store, particularly one that’s standing at the center of Marshall Street. You have to act really cool, pick the right beer and avoid tripping over the big ass dog owned by the grumpy merchant.

It’s a nerve-racking process, yet an exciting adventure. Free popcorns are available, but it will do you good to avoid it. It’s not worth it. While at this store, you might try to get a smile from the grumpy owner. If you do, you’re a sure winner.

It was in 1988 when the first Bar-B-Que at Dino was opened at the downtown area. Since then, this diner has been a go-to spot for people who are looking forward to enjoying a delicious BBQ in Syracuse. Consuming 1 “Tres Hombres” a day can keep the doctor away.

This is the best place to be after watching a sports game. You might have seen the Syracuse University mascot do its act over and over.

Over 10 sororities and fraternities get together in order to host a big party at the parking lot. There’s no telling when this event will happen. These parties are held as long as there’s a reason to drink such as after a successful football or basketball game.

Sure it’s a bit creepy when you take a blaze right next to dead people. Hey, you are getting tomb-stoned.

Each year, the New York State Fair arrives at the Syracuse Fairgrounds starting August 21 to September 1. This is the best way for you to spend the weekend. It would be a lot of fun to watch the fair and get some time off-campus.

The phrase started as a joke until people used it over and over. The legend went ahead. It could be a difficult thing to pull off on the bucket list; however, it will be worth it to visit the dome.